Below are the details for the Jr. USTA Teams we run that are based out of the Exton/Downingtown/Lionville areas

We will have teams in the following divisions. We will have a team in each
12 and under (Green Dot Ball)
14 and under
18 and under

Coaches: Justin DePietropaolo will be the teams head coaches and responsible for facilities, balls, practice, lineups, communication with parents, and communication with opposing coaches.  We will also have assistant coaches for each team who will be at practices and away matches.

Level of Play Eligibility/Practice Squad: The level of play is intermediate, so players should be generally be able rally over the net, keep score and serve. New team players will be subject to a tryout and/or skills test at the beginning of the season, which will focus on these factors.

USTA Membership: All players must be USTA members, which can be purchased at www.usta.com. USTA membership is $20/year and includes subscriptions to various publications.

USTA NTRP Ratings for 14 and under and 18 and under: Previous players will now have NTRP ratings assigned to them which will determine which divisions our teams will be in.  New players will have to self-rate.  Player ratings for prevous players can be found here: https://tennislink.usta.com/TEAMTENNIS/Main/FindAJuniorRating.aspx.  Please note that the 14 and under and 18 and under team will most likely be affected by this as we are are looking to form an intermediate team which means all players should be 3.4 or below.  This may change if it turns out we have more advanced players signed up for the team.

Location: In 2022, we ideally we would like to have practices on Tuesdays in Exton at Miller Park and practices on Wednesdays and matches on Saturdays at Downingtown West HS.

Matches: There will be 6-8 matches for the season, half of which are home, and half are away. Matches will take place on Saturday afternoons for a 2 hour anywhere between 12pm and 5pm. The 10u, 12u, and 14u season will likely run from April 23rd – June 11th . The 18u season will run from May 7th – June 18th.  There are spots for 4 boys and 4 girls in each and match, so while players may not play EVERY week, they will play in 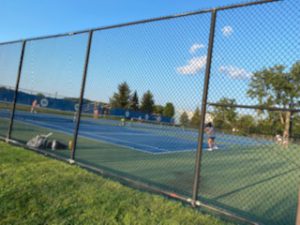 the majority of the matches.

Practices: Team practices will be held on Tuesday and Thursday late afternoons or early evenings, starting the week before our first match and ending by the end of the season.  Players are expected to come to 1 night of practice.  Note if they would like to come to both nights, they can but it’s an extra $40 for the season.  All practices be at Downingtown East or West HS.  Practice times are as followed:

Parents: Parents are responsible for transportation for their players to and from matches. Occasionally we will ask parents to help with lineups as well for away matches.

Team Names: Team names will be given to teams as consulted by players and coaches and may or may not include “Just Tennis” in front of the name to provide program unity.

Uniforms: We have a variety of youth size Just Tennis DriFit shirts that are available for free at a first come- first serve basis.  Also, additional Just Tennis apparel can be purchased here: http://justtennis.logosoftwear.com/.  We would like players to wear their uniformed shirts, but it’s not a necessity. 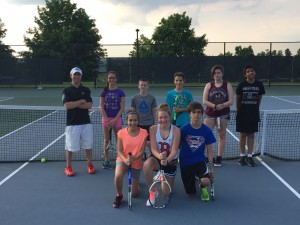 Players/Team:  Spring teams are coed, so we will take a maximum of 6 boys and 6 girls PER Team and we’re looking to do multiple teams per division. If we have more players interested in playing that slots available, the FIRST priority is those that have submitted their online interest form by the April 5th deadline.  The SECOND priority is for players that have competed for our teams in the most recent season.  Those that have competed in Fall 2021 will receive top priority.

Equipment: 18u and 14u divisions will use yellow balls.  The 12u division will use green dot balls.  .  All players are responsible for providing their own racquets.

Registration: Please Click on the Link Below to complete the first step of registration which is filling out our Interest Form. We need to know by April 3rd if your player is planning on playing this upcoming season by completing Step 3 of the registration. If not in by early April, there is no guarantee that your player can be on a team.