Late June of 2014 seems to be the time period for major sporting events this year. We’ve got Wimbledon in full swing, the World Cup reaching its knockout stage, and of course, the Picket Post 10u Summer Classic, held at one of my favorite sites to host tournaments; Picket Post Swim and Tennis Club. It’s always a great atmosphere at these tournaments. We seem to get perfect weather (knock on wood), an eclectic dynamic of parents in the gazebo area, and great tennis!

We tried not to let the abnormally loose painters tape get in the way of our fun, and in the end, everyone seemed to have a positive (yet possibly exhausting) experience out there.

Girls 10u: We had some tournament new- 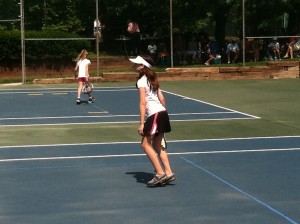 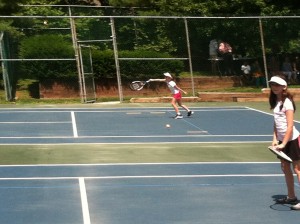 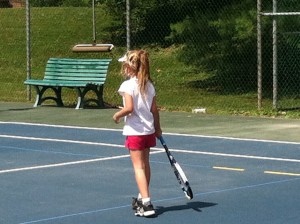 comers and tournament veterans in this draw. I was impressed with the level of play of the experienced players (especially the serves), as well as the poise and maturity of some of the younger, lesser experienced players. I’ve seen players collapse, cry, kick, scream, curse, etc, but not in this group. Everyone carried themselves like little professionals out there! In the end, Sophie swept the girls singles with some impressive wins. Nina and Sapna also maintained winning records in the round robin, and Michelle and Isabella had some great points as well. Great job girls! Check out some girls tournament pictures off to the right here.

Boys 10u: In this division, there were some familiar faces, and there were some newcomers. From Abhineet and Abhiraj, who were playing in their 3rd Just Tennis Picket Post Tournament, to Andrew who was playing his first 10u tournament ever, this draw had an interesting, exciting, and eclectic cast of athletes.

The first round had some pretty tough matches. In one particularly long, grueling match, Hemanth defeated Darren by a score of 5-4, 4-2, in a match with some long, 15+ ball rallies. Defending finalist Abhiraj also had to battle in his first round match, defeating Aditya by a narrow margin of 4-2, 5-4.

In the second round, the Yi brothers from Wynnewood, PA brought their A games. They were crushing their serves and approach shots, hitting blistering topspin groundstrokes, and impressing the crowd of parents with their big hitting games. John, a young player out of Kinetix faced off against Brian (one of the brothers) in the second round and played a very smart, poised match. He fought hard, kept his cool, and enjoyed himself thoroughly, despite losing 4-2, 4-1. There’s nothing quite like seeing genuine enjoyment for the game out there.

In the semifinals, Abhiraj played his usual counterpunching, consistent game, taking balls on the rise with his lefty strokes, and trying to outlast and outsmart his opponents. This style frustrated the big-hitting Brian, and Abhiraj earned his spot in the finals (his second straight at Picket Post), falling to the his knees and kissing the court after the match in celebration.

In the other semi match, Justin (one of the Yi brothers) took out Hemanth 4-1, 5-3 in a match that featured a lot of offense, and some great topspin rallies.

In the finals it was Justin vs. Abhiraj. The lefty counterpuncher vs. the big hitting, big serving righty. In the end, Justin’s offensive game was extremely on point this match. He was smacking first serves in the corners, moving the ball around, and hitting short ball winners with ease. Each time he got a short ball, he shortened his backswing, exaggerated his contact point, and just crushed it. Abhiraj fought hard, and did well getting to the finals, but Justin earned the championship this time. Here is a photo of me and the finalists! 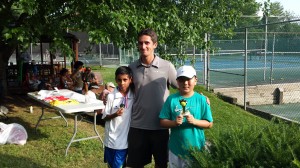 This was a full compass draw, which meant there was ample opportunity for everyone to play matches on the boys side. And of course, there were some battles out there. In one hard fought match, Aditya defeated Erik by a score of 2-4, 4-1, 9-7. I was pleasantly surprised at the attacking play in this match (and others in this tournament). In tournaments past, there was a lot of point construction and long, exhausting rallies, but in this tournament, it was more attacking, hitting precise approach shots, and getting to the net.

Special thanks goes out to Alex DeCecco and the Real Tennis at Kinetix program. They brought 5 players out to the tournament and they all played very well. They fought hard, were extremely poised, and simply enjoyed the experience. There were no mental breakdowns or excuses out there. Just perseverance and consistent tennis. Great job Jack, John, Erik, Darren and Sapna! 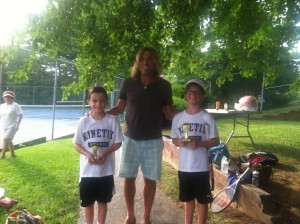 When it was all finished, Justin came in first, Abhiraj came in second, and Justin’s brother Brian defeated Hemanth to win third place.

We hope everyone had a great experience out there! Myself and my Assistant Coach (Julia) enjoyed supervising the matches and watching the kids battle out there. They’re really developing their own on court personalities, and tennis is maturing them in a way that even school may not be able to. They’re managing mistakes, persevering, battling, trying to find a way to win and problem solve, and when they’re done attempting to physically pick apart the person on the other side of the net, they come up, shake hands, and compliment their opponents, oftentimes even using 3+ syllable words! (ie “you played a terrific match! You had some fantastic forehands). Way ahead of me when I was their age! I was still hitting serves with a semi western grip and complaining to my Mom every time I had to play against a girl in my local country club junior match play sessions. Great sportsmanship, player development, and personality development all around.

Here are some pictures from the event! Hoping to see you all on the courts soon. Until next time…. 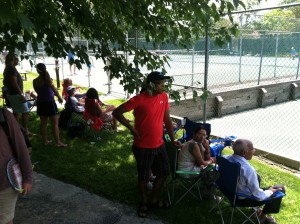 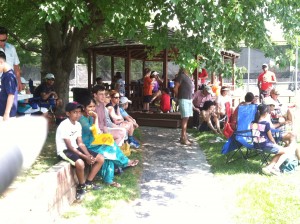 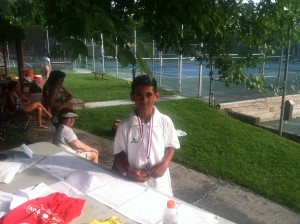 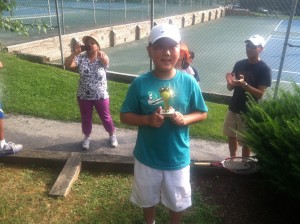 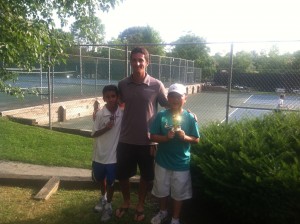 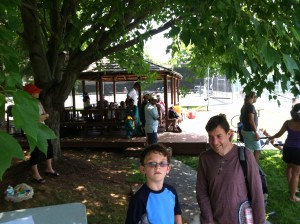