Over the years, the Chester County Suburb of Exton, Pennsylvania has become a real hotbed for recreational tennis. On Sunday, August 24th, some of the premier tennis providers in Exton collaborated for a great day of tennis for everyone.

This event was organized by local tennis enthusiast Steve Gibson and his organization, Steve’s Tennis. Just Tennis LLC, PATTA, and Tennis Addiction also helped to staff, market, and promote the event and make it a massive success.

In the end, there were easily between 60 and 80 kids and adults from throughout Chester County who came out to enjoy tennis. And it’s great that they did, because there was something for everyone.

We featured a table with registration for PATTA leagues, Just Tennis Junior Teams, and private lesson packages, as well as snacks and drinks for everyone

Also, USTA Middle States was nice enough to donate all sorts of tennis goodies to donate to participants. 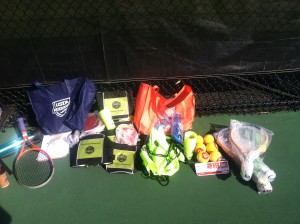 Event Highlights: We had 7 courts and we took advantage of every one. On the first 2 courts, Celes and Matt from Tennis Addiction taught between 15-20 junior players and ran lots of fun, engaging drills such as “around the world.”

The next court featured fun, fast paced adult instruction and drills led by Steve Gibson. When the court got too crowded, he sent players over for some exhibition doubles matches and hitting sessions on the next two courts.

On the end, we had 2 8U courts set up and ran all sorts of fun drills, games and activities for the 15 kids aged 8 and under who showed up. From “Jailbreak” to “Back of 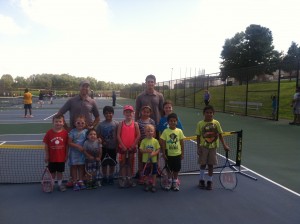 the Bus” to “Princesses and Dragons,” Justin and I had a great time with the young ones and were able to give them some great prizes as well, including new racquets!

After an hour or so of fun games, drills, exhibitions and activities for everyone, we brought it in for some group pictures, snacks, refreshments, event signups, and we gave local tennis leaders such as myself, Justin D, Matt, and Steve to talk a bit about their programs and reinforce the fact that Chester County and the Middle States section as a whole is becoming a great hotspot for tennis with lots of great opportunities to participate at any level. Based on this picture, it looks like everyone is having fun with tennis! 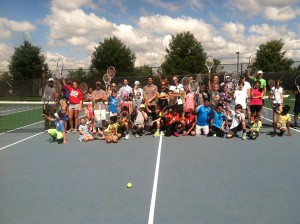 After that is when the event really got interesting and fun. We brought everything together, spread out all the prizes throughout the courts and gave the kids a chance to hit the targets (the prizes) for a chance to win them. We had everything from racquets and lunch boxes to t-shirts, hats, and water bottles. Here’s a sample of what the court looked like before the kids used their precision aim to earn themselves all sorts of tennis prizes: 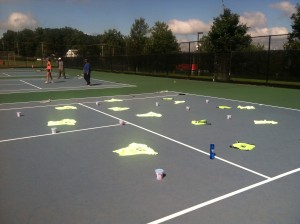 We gave the kids the chance to hit groundstrokes, volleys, and everything in between in order to get their tennis prizes. Needless to say, a few kids will be going to school with USTA lunch boxes, bags and water bottles for this first week of school that’s coming up in the area.

The next court down, Steve brought a radar gun to clock the speed of incoming serves. I saw a few pretty fast ones, but not sure if anything exceeded 100mph on this day. Here’s Steve in action clocking serves. 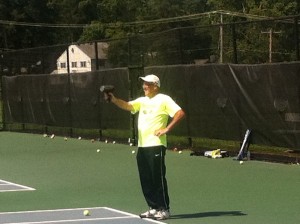 In the end, this event achieved its goal of providing tennis awareness and activity for the local community. We had people from our programs, people from other programs, and people who simply read about this event in the newspaper come out to enjoy this sport of a lifetime on a beautiful day in Chester County. Here are a few more pictures that capture the fun tennis activities that took place this day. Looking forward to the next block party, wherever it may be! Special thanks to Steve’s Tennis for being the primary organizers of this event as well as Just Tennis, PATTA, Tennis Addiction, USTA Middle States, and the Professional Tennis Registry. 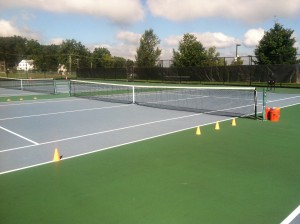 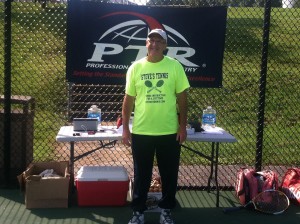 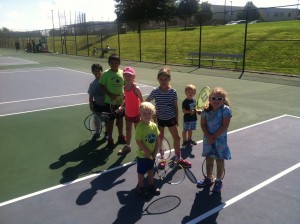 8u players enjoying some “jailbreak”

These kids want some prizes! 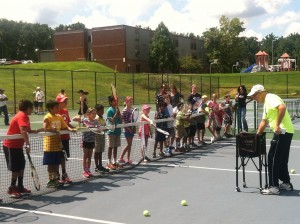 We decided to let them volley for prizes 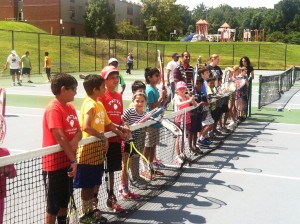 Enjoying some net play for prizes 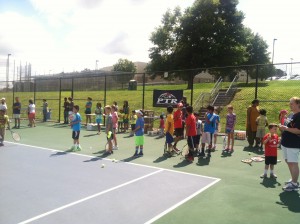