Over the course of the past 2 summers, we’ve hosted a few memorable 10 and under tournaments at Picket Post Swim and Tennis Club. This time around, we changed it up a bit and hosted our first ever 12 and under ‘green dot’ tournament, featuring balls that are slightly lower in compression compared to standard tennis balls.

This format gives the young players a chance to rally and construct points on a full court without being overwhelmed by the high bounces of a regular tennis ball.

To start, a special thank you goes out to the USTA Foundation (formerly known as USTA Serves) for donating hats, shirts, flyers and balls for this event. They’re a great organization and I was fortunate enough to run the New York Marathon as a part of their team last year, raising $3,500 for local tennis and education programs. We didn’t raise quite that much, but we were able to donate $45 of our merchandise sales, which can provide a healthy snack for kids in after school programs, or possibly even provide books for after school reading clubs.

As usual, we had fantastic weather for this event. The sun was shining and the sky was cloudless. It was the perfect day for tennis.

This event featured 12 and under boys singles and 12 and under girls singles divisions. Participants in this event ranged in age and tournament experience. There were players like Sophie, Zach and Abhinav, who have won tournaments earlier in the summer and have tournament experience, as well as players like Sid and Charles, who fell in love with the sport this summer, participated in a ton of camps, and decided that this was a great time for their first ever tournament experience. It’s always interesting to hear the players expectations of these tournaments. Leading up to the event, I heard every question out there including “will there be chair umpires?” “Will there be sports broadcasters there?” and of course “will the people from the news be there?” I guess for some, the connotation of the word ‘tournament’ is very official, when in reality, this was a super fun, low key, competitive event.

Girls Division: To start things off, there were a few memorable first round battles in this draw of 8 girls. To start things off, Allison defeated Saanvi by the narrowest of margins (5-4, 2-4, 8-6) in a match that featured lots of great offensive play, counterpunching, and momentum shifts. Allison really had to stay mentally strong to pull this one out.

In another close marathon match, Ana defeated Siya by a score of 4-1, 4-5, 7-5. On one of the changeovers, Ana said “at least we’re getting the most out of this match!” and this couldn’t be more true. Ana and Siya gained valuable experience constructing points, recovering, staying mentally strong, and playing tiebreakers (they played back to back tiebreakers).

In a battle of 2 hard hitting Tennis Addiction players, Madelyn defeated Meera by a score of 5-3, 4-1. Sophie (the champion from our previous 10U Picket Post Tournament) also moved on with a win over Cassandra.

In the semifinals, Madelyn and Sophie looked very strong in their matches, earning well deserved spots in the finals where they’d face each other. The first set was an intense battle. It featured long rallies, transitions from offense to defense, and (most notably to myself as an instructor) great footwork and adjustment steps. These girls were really moving well out there on the court! After a lot of hard playing and positive self talk, Sophie pulled out the first set in a tiebreaker and remained mentally strong, winning 4-0 to earn the title. Here is a photo of the finalist and winner with me: 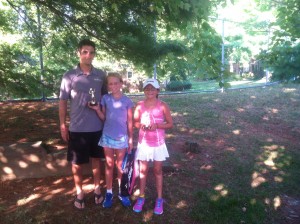 In the consolation bracket there were some long, physical matches as well. In one of them, Siya defeated Cassandra 4-2, 4-5, 7-4. In the next round, an exhausted Allison pulled out the 2-4, 4-2, 7-3 win over Siya, despite some fatigue and a blister on her playing hand.

In the other half of the draw, Saanvi cruised to the final and ended up taking the consolation title after Allison withdrew from the tournament after a long, tiring, physical day of tennis. Great job girls!

Boys Division: This draw was a nice mix of younger players, older players, new players, and experienced players. The goal is for everyone to come out of the tournament with a fun, positive experience. With a draw as eclectic and fun as this one, a good experience was inevitable. In the first round of this draw of 7, Zach utilized his speed and consistency to cruise to a win over Charles, who was playing in his first ever tournament. Abhinav and Andy also earned solid 4-0, 4-0 wins in the first round, earning spots in the semifinals.

The first semifinal match saw 2 of the tournament youngsters square off. 7 year olds Zach and Samuel (who got a first round bye) took the court in a highly entertaining match. Samuel showed off some great slice and topspin as well as an array of athletic shots well beyond his years. Zach showed a lot of consistency and heart out there. When it was all over, Zach utilized his counterpunching, quick style to earn a 4-2, 0-4, 8-6 win over the talented young Samuel.

In the other match, Abhinav continued his run with a 4-2, 4-1 win over Andy. Abhinav’s serves were really on that day and he was picking his spots and playing very offensively. Which leads us to the boys final featuring Zach and Abhinav.

This seemed like an unlikely matchup at first. The 7 year old vs. the 11 year old. The tall topspin all court player vs. the smaller counterpuncher.

In the end, Zach fought hard and got as many balls back as he could, but Abhinav’s serve speed, placement, and topspin heavy game proved to be too much. Abhinav took the title with the 4-2, 4-2 win. 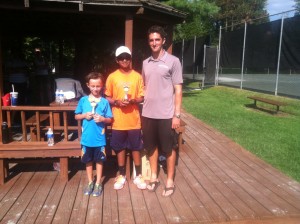 In the consolation bracket, Andy and Samuel made it to the finals, and Andy took the title with a 5-4, 4-1 win.  Great job guys!

I should also put a special mention in to Sid and Charles. They started out this summer with limited tennis experience, but really started to take a liking to the sport. After several weeks of tennis camp, a few lessons, and several hard fought games of “burn,” “king of the court” and “team 105,” they were excited for their first ever ‘official’ USTA tournament. Hope you guys had fun!

Thanks to all parents and players for making this a fun first green dot tournament. We hope to see you in the Fall. We definitely plan to host more of these in the future.

Here are some action shots from the tournament. Enjoy! 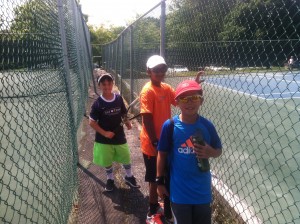 Hanging out before they played each other. Andy warned his opponent “if I were you, I’d stay away from my backhand.” 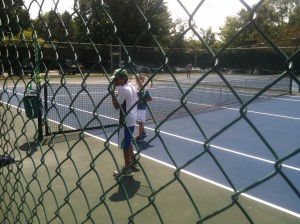 Sid and Christian about to start their consolation match 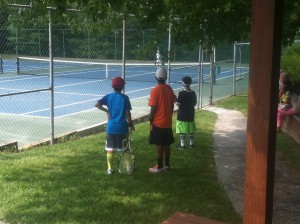 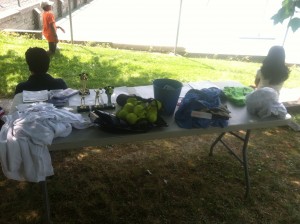 The Draw/Prize Table – lots of goodies this time around 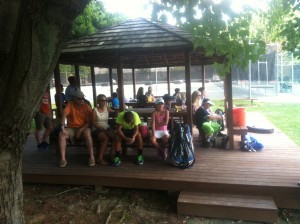 Getting crowded in the spectator gazebo!